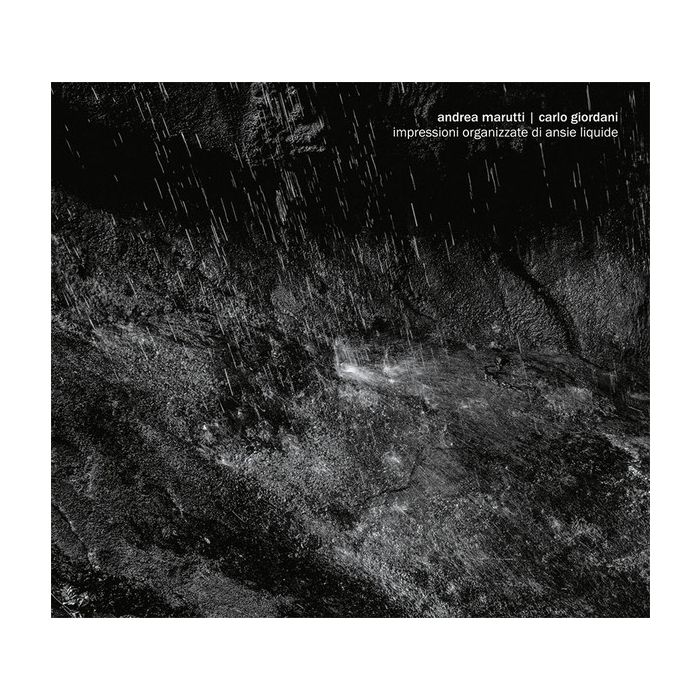 The origins of the album date to 2011, when Andrea Marutti was asked by the filmmaker and cultural agitator, Massimo Indellicati, to compose soundtracks for a series of experimental short films - "Aquology - Oceano interiore" - centred around aquatic and science fiction themes. Intent on intervening with his own practice in electronics and synthesis, he asked field recordist, engineer, and software designer, Carlo Giordani, to come on board.

While the film project was never fully realized - only small fragments of Marutti and Giordani's initial collaboration were used - their creative relationship bore fruit, bringing them together regularly over the subsequent years, each pushing and expanding the other's approach toward sound into new territories. The album - the result of an enduring process of reworking of the cumulative material that resulted from their collaborations between December 2013 and January 2020 - melds these two distinct sensibilities into a single, palpable force.

"Impressioni Organizzate di Ansie Liquide" rests at the sublime juncture of shifting materiality and perception; where the organic transforms into the otherworldly and the synthetic bubbles with life. The collision of two highly individualized creative practices - built from a vast pallet of sonority - across its breadth, the locations of source and the intervening hand shift in and out focus, gathering as an expanse ambience and event that gives the impression of being guided by chance occurrences and responses of its own making.

Amplifying the incidental into the mystical and metaphysical, this work challenges the very notions of how we locate the meaning of music and art. Unified by the thematic vision of water that first brought Marutti and Giordani together, the album culminates as a series of evolving, abstract images, alluding to the embryonic fluids that give way to life. Drifting long tones, buzzing electronics, and woven textures of ambiguous sound, rumble and dance between the foreground and distance, penetrated by punctuations drawn intermittently from Marutti's synths and Giordani's deft snapshots of the world.

Like its subject, "Impressioni Organizzate di Ansie Liquide" is an immersive, languid realm, filled with elegant, poetic beauty, that bristle with unknown elements and the lingering potential of danger. A remarkably sensitive reminder of the creative potentialities that rest at the heart of electroacoustic, concrete, and field recording based musics, doubling as a vision of their possible futures, Marutti and Giordani have created an album that simultaneously drowns the ear and fortifies it with breaths of fresh air.

The album is presented on a glass-mastered CD limited to 200 copies which is housed in a deluxe six panel digipack with black finish, and features pictures by Stefano Gentile.