€22.00
Title
theeOorgannnissstheeGgreattestttSsynthesizerrrEverrrrrrrr
Add to Wish List
Skip to the end of the images gallery 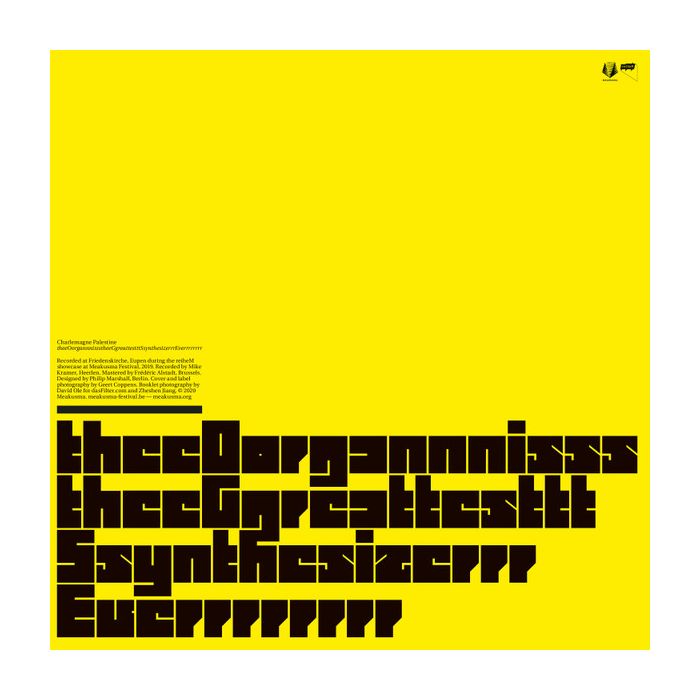 Charlemagne Palestine's performance on the organ of the Friedenskirche, Eupen for the reihe-M showcase at the Meakusma Festival 2019 was one of the many highlights of that year's festival edition. This record features the full live performance as Palestine conjures up his dense definition of maximized minimalism, introducing the performance with a minimalist drone and himself singing on top. His voice touches upon melancholy and the absurd and gives the piece context and direction. From there on, anything goes. The piece develops while complex layerings of chords and musical sentiments shift in and out of focus, yet all take center stage all the time. Ending the piece, Palestine excitedly shouts out that the organ is still the best synthesizer ever made. In typical Palestine fashion, his performance made the whole church resonate, an effect that can be repeated easily when listening at home, because this record demands volume and lots of it.

Brooklyn-born Charlemagne Palestine has long been hailed as one of the originators of modern minimalist and experimental music. He very firmly describes his music as maximalist. His immense body of work features many solo albums, collaborations, performance-driven video works and much more. In his work in performance, music, video and related media since the late 1960s, he uses certain emblematic objects such as teddy bears, cognac and scarves. They serve as signatures, he calls them symbols of identification.

This record comes with a 12-page booklet that features an extensive Interview with Charlemagne Palestine, conducted by Dirk Specht and Hans W. Koch of reihe-M.