€15.00
Title
Preparing For Power
Add to Wish List
Skip to the end of the images gallery 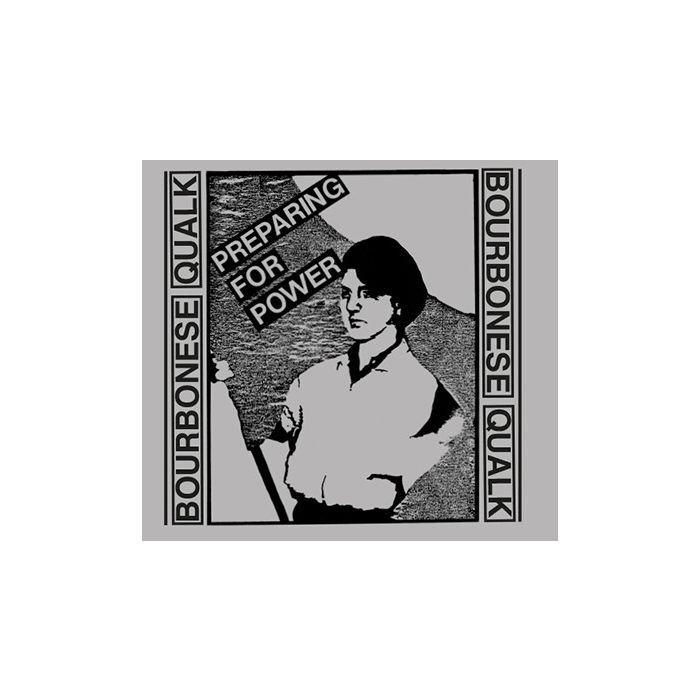 Bourbonese Qualk were an experimental music group from England who where active from 1979 until 2003. The group were always obsessively and uncompromisingly focused on controlling their work – they ran their own record label, recording studio, tour organisation and music venue (the legendary ‘Ambulance Station’) – they refused to integrate into the commercial music racket turning down publishing deals from major labels – stubbornly opting for total independence. Bourbonese Qualk were also known for their political activism which was formed in the crucible of the 1980s Britain: The Miner’s Strike, Falklands/Malvinas war, Anti-fascism, Thatcherism, Moneterism, squatting/housing, local government corruption, anti-capitalism, and Anarchism – which was further re-enforced by touring Europe and meeting like-minded groups and organisations. They saw their music as a revolutionary cultural force – a belief that radical musical forms must be part of positive social change. Despite this position, the group avoided dogma, cliché and propaganda, preferring to let their audience come to their own conclusions – their work was often ambiguous and directly critical of cynical power-politics of any colour – often irritating members of the traditional ‘organised left’. In 1984 Bourbonese Qualk occupied a large empty building on the Old Kent Road in South London which they turned into a base for their activities and a co-operative for artists, musicians and writers as well as a centre for radical political activism – specifically as a co-ordinating centre for the ‘Stop The City’ anti-capitalist riots of 1984-1986. They never recorded in a ‘proper’ studio (not that they could ever afford to), choosing instead to work with their own extremely basic equipment (at a time when home studios were very unusual – the unique raw sound of these recordings is the result of their choice – which now, ironically, is in vodue due perhaps to the overwhelming obliquity of ‘clean’ audio digital production tools. If Bourbonese Qualk have a legacy, it is that ‘culture’ should be reclaimed, re-defined and owned by the people, wherever they are, however small and not by the state or the market and that ‘culture’ is a vital vehicle for debate and radical change. The last recorded album at their South London squat, The Ambulance Station on the Old Kent Road, and again released on their own Recloose Organisation, saw the band develop further beyond the limits of the post-punk / industrial scene where genres increasingly became redundant. Ethno, jazz, funk and EBM are all buried deep in the album as it seeks independence. The title, a critique of the Labour movements ineffective and limited call to arms against the prevailing Thatcherism of the mid-80s, encapsulates this wider oeuvre. From opening Return To Order, the acoustic gloom is offset by tight musicianship and countering melody. The switch of Outcry precedes psychedelic anthem, Boggy Creek, with its VU remembrance. Blighted pulses Confrontation, Xenophobia, Backlash and closer, Insurrection, sense the darkness, but the ground has shifted forwards with the legendary 1.51 minutes of man'n' machine that is Lies, the enwrapping symphonic dub vocal of Born Left Hearted and incongruously pretty, Is It As It Was? At times, suffocating, uncomfortable, at others light appears as history progresses. Preparing For Power is BQ at their most uncompromising and essential. Available on CD for the first time now, with bonus tracks added that were not on the original Vinyl LP.