€24.00
Title
Kyo Mu/Hochtöner
Add to Wish List
Skip to the end of the images gallery 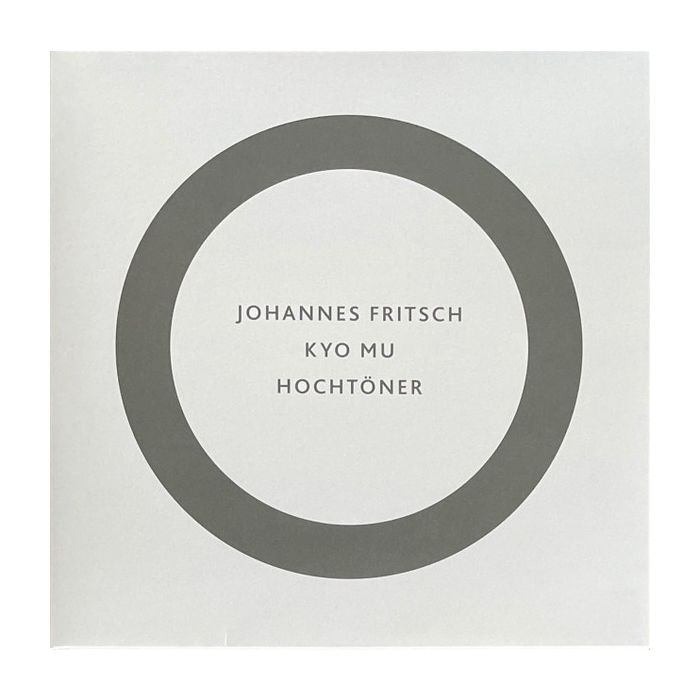 Johannes Fritsch (1941–2010) was an award-winning composer, musician, publisher, studio owner, author and music teacher.
Following his studies at Cologne University and the Cologne Musikhochschule (musicology, sociology, philosophy; viola, composition with Bernd Alois Zimmermann), Fritsch received his viola performance degree. From 1965–70 he taught music theory at the Cologne Conservatory. From 1964 to 1970 he was a member of the Stockhausen Ensemble, participating in numerous musical premieres, concert tours (e.g. the world exposition in Osaka in 1970), radio broadcasts and recordings. From 1971 to 1984 he was head of the composition course and the seminar for New Music at the Akademie für Tonkunst in Darmstadt. From 1984 to 2006 he was Professor of Composition at the Hochschule für Musik und Tanz Köln.
After returning from Osaka in 1970, Fritsch and two fellow former members of the Stockhausen Ensemble, Rolf Gehlhaar and David Johnson, established the Feedback Studio Köln. This was followed in 1971 by the founding of the Feedback Studio Verlag – the first publishing house owned by composers in Germany, which Fritsch mainly managed on his own from 1975 to 2010.
Fritsch’s complex musical estate consists of approximately 130 works: it covers electronic music, chamber music, ballet, theatre and film music, organ compositions, an opera and pieces for large orchestras. Although Fritsch’s compositions are varied, all of them convey a strong interest in new sound combinations and sound colours.

KYO MU (Japanese for ‘emptiness and nothingness’) is a composition for the Japanese bamboo flute shakuhachi und audiotape, premiered in 1982 by Hitomi Endō at the Second Weltmusik-Kongress in Vlotho, Germany. The recording on this LP is from the premiere and was made by the Feedback Studio. The version for shakuhachi was performed on numerous occasions in Europe as well as Japan. According to Johannes Fritsch, however, the piece can also be performed by tenor recorders or alto recorders.
The scores of Kyo Mu are accompanied by a passage from the spiritual treatise Hitori Mondo (‘A Solitary Dialogue’) from 1823, in which the mendicant monk and shakuhachi player Hisamatsu Fūyō discusses shakuhachi blowing as a religious discipline to help liberate oneself from the rational mind: 39 pieces are 36 pieces, 36 pieces are 18 pieces, 18 pieces are three pieces, three pieces are one piece, one pieces is no piece, no piece is the breath of the mind [kisoku], the breath of the mind is nothing besides emptiness and nothingness.

HOCHTÖNER, written in 1974 and premiered in the same year at the PRO MUSICA NOVA festival in Bremen, Germany, is a harmonic composition referencing Pythagorean tradition. It was written for and performed by the three Feedback Studio founders: Johannes Fritsch, viola; David Johnson, flute and synthesizer; Rolf Gehlhaar, percussion. The trio and the live electronics make this piece typical of the 1970s work of the Feedback Studio. HOCHTÖNER was performed several times in the 1970s during concert tours; the recording on this LP was made in 1974 at a Feedback Studio Hinterhausmusik concert.
Fritsch described the piece in a text for a CD published by cybele records in 2006:
“Various levels of the composition interpenetrate each other. On the one hand, there is the harmonics theory of the tone systems: there are sounds that are overtonal in nature (natural harmonics, whistle-tones on the flute) and ‘undertones’: a frequency divider built by David Johnson is used to make audible the undertones of a high-pitched fundamental tone, together with naturally tempered spectra. As well as major (arithmetic division of the intervals according to the formula a+b:2), minor (2ab:a+b) and different temperaments (vab), the ring modulation between flute and viola plays an important role. The ring modulator provides the sums and the differences of the frequencies from the two inputs (and the products of the amplitudes) at the start. The summation tones are an octave higher than the arithmetical division of the intervals; the differential tones give the spectra clearly recognisable roots depending on their degree of consonance. Besides this constructive principle underlying the harmonic form, the piece contains self-quotes, quotes, and associations from music history and non-European music. All instrumental sounds are amplified by microphone and blend with the sounds produced by the tape and synthesizer, making it often impossible to tell which sounds have been produced ‘live’ and which are taped. The figures and formations appear as in a dream, fragments in a broad, ever-changing expanse of sound, limited only by the high frequencies.”

Special thanks to Ingrid and Lena Fritsch