€25.00
Title
Allegory And Self (Illustrations In Sound)
Add to Wish List
Skip to the end of the images gallery 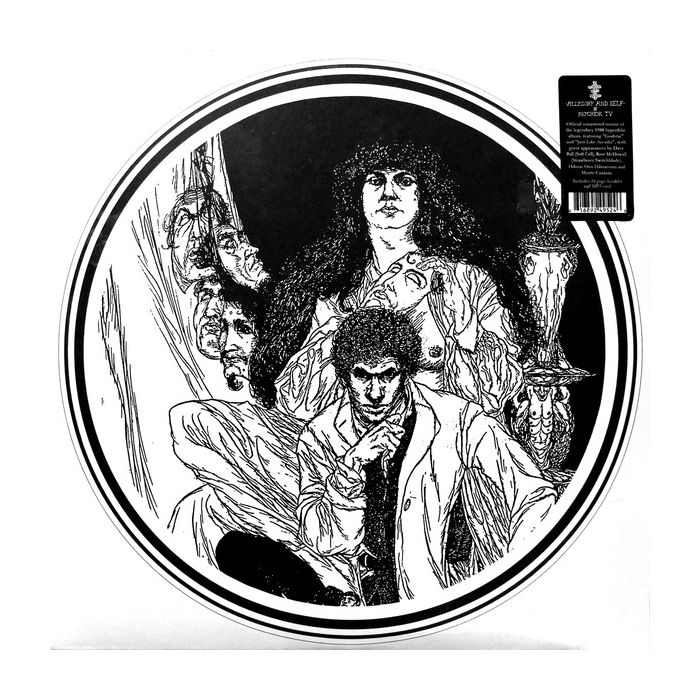 Beginning in 1982, the conceptual audiovisual troupe labeled Psychic TV set out on a multimedia journey filled with subversion, liberation and rebellion. Materialized between Throbbing Gristle co-founder Genesis P-Orridge and Alternative TV songwriter Alex Fergusson, Psychic TV started pulling in familiar faces with the likes of Peter “Sleazy” Christopherson, Paula P-Orridge, Jhonn Balance, David Tibet, John Gosling and countless others. While the members’ previous works took root in the counterculture zeitgeist of late ‘70s UK punk and conceptual art, it was no longer a question of how to rebel against authority, but rather how to carefully subvert it through collective infiltration. Parallel to Psychic TV, its members formed the anti-cult faction The Temple of Psychick Youth, further propagating the Psychic TV message and vision.

While the ensuing years saw Psychic TV’s major label infection and record breaking live album release binge, it wasn’t until 1988 that the band started to ready itself for a chart-friendly pop endeavor in the form of “Allegory & Self”. This would be the band’s most notable and successful endeavor but tragically, it would be the final songwriting collaboration between P-Orridge and Fergusson. “Allegory and Self” was a perfect storm of catchy pop melody along with subversive counter-culture reference and occult leanings, packaged in a perfect bundle of underground hits.

The record’s opening track “Godstar”, a song gushing obsessive praise upon the fallen Rolling Stone’s member Brian Jones, would give the album it’s most notable identity. Godstar’s melodic hooks and haunting, Phil Spector-era lyrical chant gives into to all the hallmarks of a chart-topping hit. “Just Like Arcadia” and “Being Lost” follows in similar footsteps, charging along with a somewhat whimsical Beach Boys-esque pop quality. The album also contained a sneak-peak into what direction Psychic TV was heading into going forward, apparent in the acid house number “She Was Surprised”. Tracks like “Starlit Mire” and “Thee Dweller” reflect more of what the Psychic TV live experience was akin to in the ’80s, aggressive and hypnotic. All together, “Allegory and Self” would stand alone as the band’s signature apex from the original ’80s line-up.

The newly remastered Allegory & Self is a split release between Dais Records & Sacred Bones Records.