€44.00
Title
The Harmonic Series II
Add to Wish List
Skip to the end of the images gallery 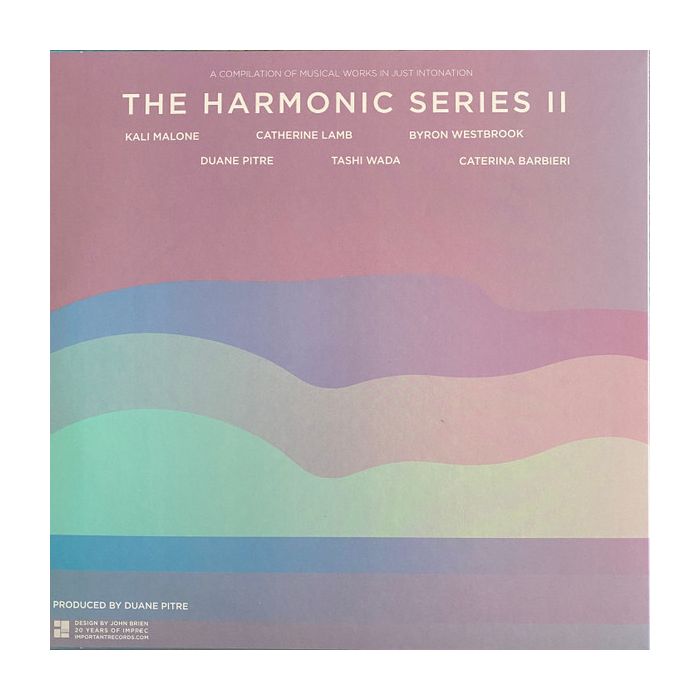 A collection of long-form works in just intonation by Kali Malone, Duane Pitre, Catherine Lamb, Tashi Wada, Byron Westbrook, and Caterina Barbieri. Each artist occupies an entire side of the collection's three LPs.

Curated by Duane Pitre, Important Records returns with its second volume of compiled works in just intonation. The Harmonic Series II, issued as a triple LP collection, features a series of long-form compositions by six of the most important emerging voices of contemporary experimental music;

Unlike equal temperament - the tuning system most commonly encountered in contemporary music - which equally divides an octave into 12 fixed notes, just intonation utilizes intervals of whole number ratios - chosen by a composer - to determine tonal positions, which can result in a highly individualised tonal language and holds the potential for more nuanced relationships and striking, sympathetic resonances. Rooted in ideas that trace their way across the last 2500 years - seeking to mirror the natural behaviour of sound within music - just intonation lays at the foundation for numerous Indian, Persian, and East Asian musical traditions, as well as a substantial amount of European music prior to the 17th century. Reintroduced into western music during the 20th century by composers like Harry Partch, Ben Johnston, Lou Harrison, James Tenney, Terry Riley, and La Monte Young, it has left an indelible mark on experimental practice ever since.

In the years following the appearance of The Harmonic Series in 2009 - presenting works by Ellen Fullman & Theresa Wong, Michael Harrison, Pauline Oliveros, Charles Curtis, and others - the broad interest in just intonation has continued to swell, inspiring Duane Pitre to curate a second compilation, exploring the work of a new generation of composers that have been drawn toward its remarkable potential.

The full scope of The Harmonic Series II engages the possibility of a multitude of intertwining sequences and relationships between its works. Kali Malone’s "Pipe Inversions” - played by Malone on a small pipe organ, joined by Isak Hedtjärn on bass clarinet - belongs to a larger body of microtonal organ works that have increasingly placed the composer at the forefront of contemporary minimalism and drone music. Thick blankets of shimmering harmonics - sliding at a glacial pace within a fractal structure of rhythmical and melodic sequence - converge as a poignant unwinding of cultural, temporal, and historical location, embedded within the disarming beauty of its interwoven tones.

Across the length of Duane Pitre’s "Three for Rhodes” - a chamber piece for ”unknown instrumentation” - deconstructed rhythms and melodic fragments swell in a dance of harmonic interplay, rising and falling within the work’s engrossing architectural complexity. Imbued with a startling sense of humanity, tonal footsteps and syntactic patterns flower with life, delivering an exacting image of the metaphorical potential of sound.

Catherine Lamb’s "inter sum” - one of a tiny number of available works to encounter the composer and renowned violist working on synthesizer - endeavours to break the visualisation of harmony as a vertical reality, rendering it multidimensionally in space. With its materiality drawn from Lamb’s own environmental field and filtered by the synth - presenting a radical rethinking of the terms of composition and musical mater - subtle tonalities and harmonics, embedded within sheets of textural atmosphere, culminate as a spectral vision of the latent musicality of the natural world.

A canon for eight-violins played by Marc Sabat, Tashi Wada’s "Midheaven (Alignment Mix)” - guided by the internal logic of its tuning system - shape-shifts into an elegantly poetic form of musical conceptualism. Interlacing long-tones bloom with complex harmonic interplay and delicate overtones, as two mirroring, overlain realizations of the composition - one moving forward as the other simultaneously moves backward - slowly converge toward a crescendo of dissonance at the midpoint, imbuing the work with emotive tension, before returning to a final ecstatic release.

Byron Westbrook’s "Memory Phasings”, composed and recorded on a combination of computer controlled modular synthesizers and a Yamaha TX802, employs the ratios of just intonation as harmonic building blocks for texture. Shifting long-tones and insectile buzzes underscore patterns of rapid appreciations and carefully balanced punctuations, forming a shimmering collective of abstractions, that blurs the lines between synthetic and organic readings of sound.

Deploying just intonation as a means for psycho-physiological exploration, Caterina Barbieri’s "Firmamento” - composed for synthesizer - deftly intervenes with the expectations of minimalism, durational music, and drone. Brooding and ecstatic - pushing the possibilities of organised sound into unexplored realms via the triggering of emotional and mental states of being - across the work’s slow evolution, sublime tonalities ride a razors edge between darkness and light, colliding in dense layers that rethink ancient modes in futuristic terms.

Taking form within the gestures of six crucial voices of contemporary experimental music - Malone, Pitre, Lamb, Wada, Westbrook, and Barbieri - The Harmonic Series II sculpts a profoundly human vision of the potential of art, where the historic becomes present and future, and the divisions imposed by cultural and temporal boundaries dissolve. Like the generations that have embraced it before them, each artist harnesses just intonation as a means to progress toward unknown territories of creative possibility and to readdress how we hear, arriving at a musical space that is highly individual and personal - captured by the diversity of the works presented within - while speaking within a collective whole.