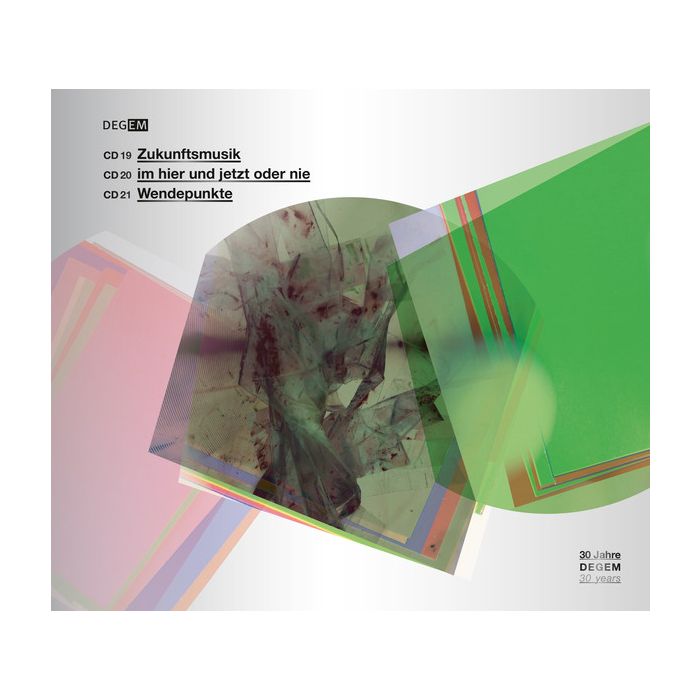 DEGEM CD 19 Zukunftsmusik - curated by Tobias Hagedorn The immediate future always plays an important role in music. While listening to music, we can develop an expectation that is either fulfilled or only partially fulfilled, or remains entirely unfulfilled.
Aesthetically, a piece of music can also be groundbreaking for the future.
Perhaps there are considerations in the music that cannot yet be fully verbalised today and thus trigger a future that would otherwise not become reality.
Zukunftsmusik (dreams of the future, literally: music of the future) is also an expression of the fact that something still lies in the distant, unattainable future. But it may be nice to indulge in utopian fantasies in order to sense goals for which it is worth taking certain paths.
Tobias Hagedorn
With contributions from Jorge García del Valle Méndez, Kirsten Reese, Ulf Pleines, Junyu Guo, Verena Hentschel, Andreas H. H. Suberg, Théo Pozoga, Greg Beller, Monika Golla, Ben Meerwein, Ludger Kisters and Florian Hartlieb.

DEGEM CD 20 im hier und jetzt oder nie - curated by Anne Wellmer The past few years have shown the whole world how little certainty there is that our familiar realities remain true and real. Around the world, autocrats are democratically elected who, once in power, undermine the separation of powers and democratic structures in their countries. With the rapidly accelerating climate crisis, weather extremes are multiplying and habitats and biodiversity are shrinking. We are in the midst of a pandemic.
Some are shouting that something must change, and quickly, if we are to save the world from extinction. Others are afraid that something could change and take refuge in conspiracy theories and fake news. What is important and necessary now? To protect the existing?
To go in new directions? To reflect? To fight? Is there still a way out of polarisation?
im hier und jetzt oder nie (in the here and now or never) is a good example of how different perspectives can complement each other to create something new in the interplay of completely opposing forces. The twelve compositions on the CD together form a kind of musical suite that seems to end in a question that remains unanswered.
Anne Wellmer
With contributions from Christian M. Fischer, Maria Pelekanou, Donna Maya, Antje Vowinckel, Karl F. Gerber, Elisabeth Schimana, Klarenz Barlow, Clemens von Reusner, Sabine Schäfer, Javier Alejandro Garavaglia, Solidarity Noise Project and Niayesh Ebrahimi.

DEGEM CD 21 Wendepunkte - curated by Folkmar Hein The years 1989 to 1994 set several new directions: politically, they brought about the peaceful revolution (in German “Wende”, turning point) with a large number of associations being founded in the German music scene (the founding of DEGEM in 1991 was part of this), and other turning points occurred which coincided with the political ones by pure chance: the completion of the analogue-digital transition and—again rather coincidentally—the influence of sound art or sound installation. Sound installation, which had finally “arrived” after a long crescendo, beginning in 1980 with the exhibition Für Augen und Ohren (For Eyes and Ears) at the AdK Berlin.
We encounter components of this moving change on the DEGEM anniversary CD Wendepunkte (turning points). The seven authors assembled here each testify to their part in the changes roughly characterised above, which I would still like to illuminate from my point of view as the DEGEM Chairman at the time, namely their accompanying achievements, especially in education and thus for the next generations. I would like to thank these authors (it is a pity that, from a purely technical point of view, many could not be included, whom we also have to thank).
Folkmar Hein
With contributions from Robin Minard, Ludger Brümmer, Orm Finnendahl, Johannes S. Sistermanns, Wilfried Jentzsch, Georg Klein and Christina Kubisch.