€15.00
Title
Labyrinth of the inner ear
Add to Wish List
Skip to the end of the images gallery 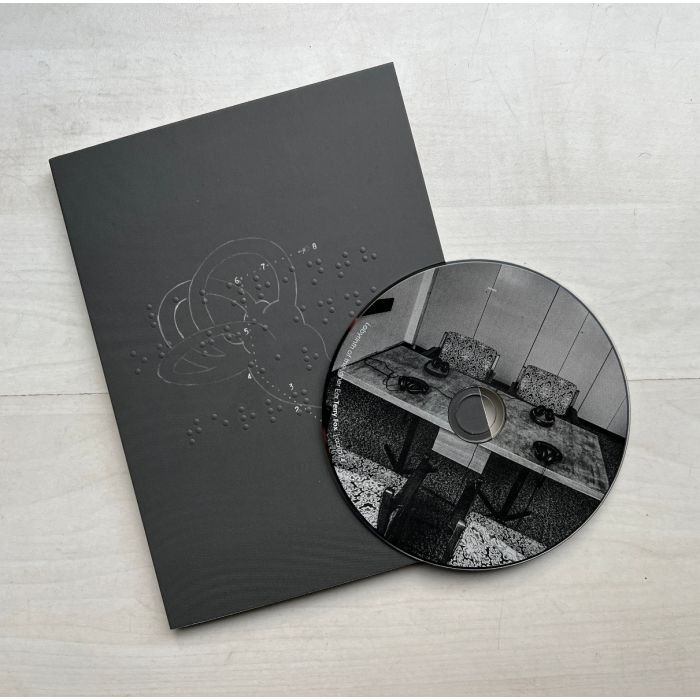 About Terry Fox: Labyrinth of the inner ear
For the exhibition “Sonambiente", I will produce a new audio work for compact disc. The title of this work will be “Labyrinth of the inner ear" and it will be recorded in Berlin on the 14th and 15th of April, 2006. The compact disc will be produced directly after the recording process and presented, during Sonambiente, in a room of the former Polish Embassy.
This will be a kind of “drone" work consisting of the repetitive tapping of a sightless person (the artist, Siegfried Saerberg) navigating his way through an urban environment and finally returning to the place where the walk began. The sound of the cane, either tapping or sweeping back and forth, would be a constant in this composition. It would cease only when Siegfried stops walking for some reason, for
example: an interesting acoustical space, a ride in a public transport, etc.
Location interpretations could be ascertained by the sounds surrounding the steady central position of the cane; an alley, a busy shopping district, the relative quietness of a back street a park, and so forth. This walk would, itself, finally return to its place of origin.
Terry Fox, Köln 2006

About Terry Fox
Terry Fox (b. 1943 Seattle – d. 2008 Cologne) was one of the leading pioneers of American Body Art and Conceptual art. He became famous in the Seventies with performances in which he used his own body as a medium for exploring often extreme physical and psychological experiences. In numerous installations, actions and street events he directed a heightened attention to everyday phenomena and aspects of social interactions. Fox researched both unknown and little regarded aspects of energy in substances, and the transformative qualities of materials. And from the 1980s on, language, as both substance and meaning, would play an increasingly important role in his space related works and objects.
With his lifelong, innovative exploration of sound and space, Terry Fox is also one of the seminal figures in contemporary Sound Art. He became known worldwide in the 1970s for performances with meters-long piano wires stretched in rooms, often fastened from one wall to an opposite wall. With his understanding of sound as a sculptural material, he has created an impressive body of work located between Visual art and Acoustic Sound art. In his later years quiet sounds at the limit of audibility and silence became more and more prominent.
The ephemeral, the invisible, time, space, the body, words, letters, sound -throughout his entire work Terry Fox used the elemental forms of human existence to explore the possibilities of sculpture and extend its limits..
www.recalling-terryfox.de